The Android app requires an Android device (i.e., a phone or tablet) running Android version 3.0 or later. The app does not require cell service.

Learn about troubleshooting the Android version.

Tap the Play Store button on your Android device and then choose Update All to make sure you have the latest version.

Version 4.0.0 was released on October 9, 2019. It contains several dozen changes to the base-map and is now identical to the Fourth Edition of the paper map. It also fixes a problem where the map would appear in landscape mode on high resolution phones when the Display Size was set to Small in the Android settings, and reduces a problem where the map was blurry on some devices. As always, it's a free upgrade.

Version 3.6.0 was released on February 11, 2019. This version links to the Wasatch Backcountry Skiing Guide website. This version also has improved searching and a new base-map with dozens of additions and improvements. As always, it's a free upgrade.

Version 3.1.0 was released on December 12, 2017. This version is has a new base-map with dozens of additions and improvements (the same base-map as the iOS version 3.5.0).

Version 3.0.2 was released on October 30, 2017. This version improved approximately 25 of the names in the list of locations (some tweaks, some additions). It also fixed a couple of bugs when zooming.

Version 3.0.0 was released on September 8, 2016. This version shows ski area outlines, the 30° slope shading is darker, the accuracy of the GPS was improved, dozens of minor changes were made to improve the location names, and several usability improvements were made (e.g., the small compass is now always displayed on the map).

The backcountry locations displayed in the app are approximations. You should not expect the app to position you precisely on a run or at the entry of a chute. We welcome your suggestions to improve the data.

Optimized for phones and tablets 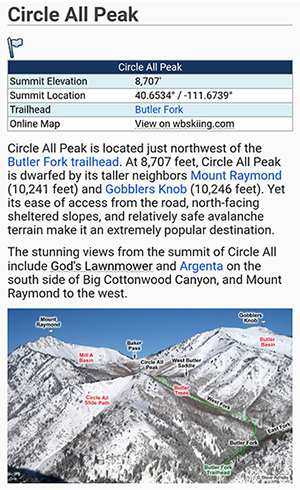 Hundreds of the locations that are displayed in the Wasatch Backcountry Skiing app are linked to the Wasatch Backcountry Skiing Guide. These locations display "links" next to their names in the app. After selecting any of the linked locations and tapping on the "Tap here for more ..." box, information about the location will be displayed in your browser. The information includes details such as skiing difficulty, skinning distance, vertical climb, altitude, aspect, and slope angle. You can tap on the "WBSkiing" text in the top-left corner of Safari to return to the map app.

Zoom in by double-tapping or by pinching; Zoom out with a two-finger double-tap. Move the map by dragging the screen.

Rotate the map with a two-finger twist. A small compass is displayed in the upper-left corner to show the map's orientation. Tap on this compass to return to the north-up orientation.

Tap on the search field and type a portion of the location name (e.g., "chute"). Then select a name from the list. A red pin will be displayed on the map.

Some locations names are abbreviated and require appropriate search terms. For example, "Mount Olympus" appears in the list as "Mt. Olympus" so it won't appear in the list if you search for "Mount".

Tap on a pin to display its info banner. Tap anywhere in the info banner to begin navigating to that location.

Important: The blue navigation arrow points toward the destination and does not consider avalanche danger, cliffs, rivers, rock fall, or any other hazards. Backcountry travel can be dangerous. It is your responsibility to mitigate hazards.

Important: The compass accuracy can vary by ±10°. Look at your surroundings to avoid "GPS tunnel-vision."

To drop a temporary pin, press and hold on a location. You can then tap on the info banner to begin navigation to the pin's location.

WBSkiing relies on GPS satellite reception to determine your location and to point to destinations. Cell service is not required. The GPS signal strength is displayed at the bottom of the navigation page.

Press the Email Current Location button at the bottom of the Navigation page to send an email containing your current location. You can also send us a location to help us improve the map's database.

The Settings page lets you specify how latitude and longitude, elevations, and distances are displayed.