A new paper map was released in December 2019.

The iOS app requires an iOS device (i.e., an iPod Touch, iPhone, or iPad) running iOS 8 or later. The app does not require cell service.

Learn about troubleshooting the iOS version.

Tap the App Store button on your iOS device and choose Updates to make sure you have the latest version.

Version 3.5.0 was released on December 11, 2017. This version is now linked to the Wasatch Backcountry Skiing Guide website. This version also has a new base-map with dozens of additions and improvements. As always, it's a free upgrade.

Version 3.0.2 was released on October 24, 2017. This version improved approximately 25 of the names in the list of locations (some tweaks, some additions).

Version 3.0.1 was released on January 10, 2017. This version improved product stability.

Version 3.0.0 was released on November 17, 2016. This version shows the (approximate) ski area rope lines, the 30° slope shading is darker, the accuracy of the GPS was improved, dozens of minor changes were made to improve the location names, and several usability improvements were made (e.g., the small compass is now always displayed on the map). 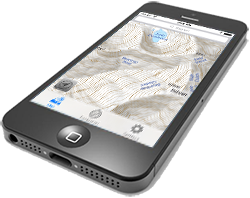 The backcountry locations displayed in the app are approximations. You should not expect the app to position you precisely on a run or at the entry of a chute. We welcome your suggestions to improve the data.

Optimized for phones and pads 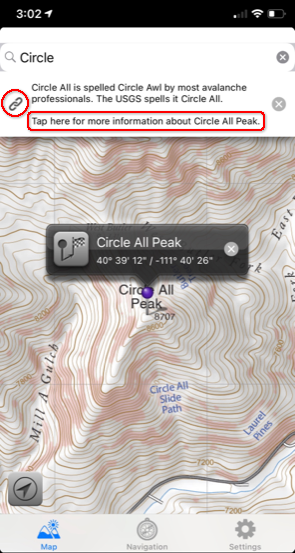 Information about the location will then be displayed in Safari, as shown below. The information includes details such as skiing difficulty, skinning distance, vertical climb, altitude, aspect, and slope angle. You can tap on the "WBSkiing" text in the top-left corner of Safari to return to the map app. 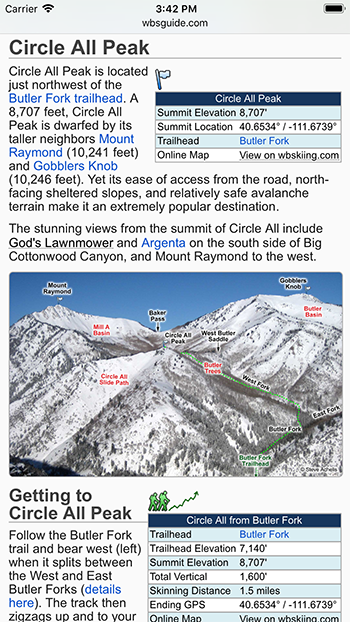 You can also visit WBSguide.com from any browser (be sure to check out its table of contents).

Zoom in by double-tapping or by pinching; Zoom out with a two-finger double-tap. Move the map by dragging the screen.

Rotate the map with a two-finger twist. When the map is rotated, a small compass is displayed in the upper-right corner to show the map's orientation. Tap on the compass to return to the north-up orientation.

Tap on the search field and type a portion of the location name (e.g., "chute"). Then select a name from the list. A purple pin will be displayed on the map. 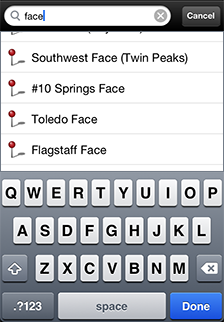 Some locations names are abbreviated and require appropriate search terms. For example, "Mount Olympus" appears in the list as " Mt. Olympus" so it won't appear in the list if you search for "Mount".

Tap on a pin to display its info banner. Tap on the info banner's button to begin navigating to that location. 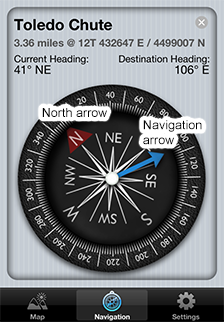 Important: The blue navigation arrow points toward the destination and does not consider avalanche danger, cliffs, rivers, rock fall, or any other hazards. Backcountry travel can be dangerous. It is your responsibility to mitigate hazards.

Important: The compass accuracy can vary by ±10°. Look at your surroundings to avoid "GPS tunnel-vision."

You can cancel navigation by tapping the

button on the navigation page or in the info banner.

Tapping the current location button a third time, or tapping the small compass, returns to the north-up orientation.

To drop a temporary pin, press and hold on a location. You can then tap on the info banner to begin navigation to the pin's location.

Press the Email Current Location button at the bottom of the Navigation page to send an email containing your current location. You can also send us a location to help us improve the map's database.

WBSkiing relies on GPS satellite reception to determine your location and to point to destinations. Cell service is not required.

The GPS signal strength is displayed at the bottom of the navigation page.

The Settings page lets you specify how latitude and longitude, elevations, and distances are displayed. 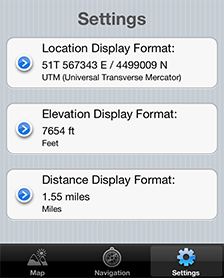